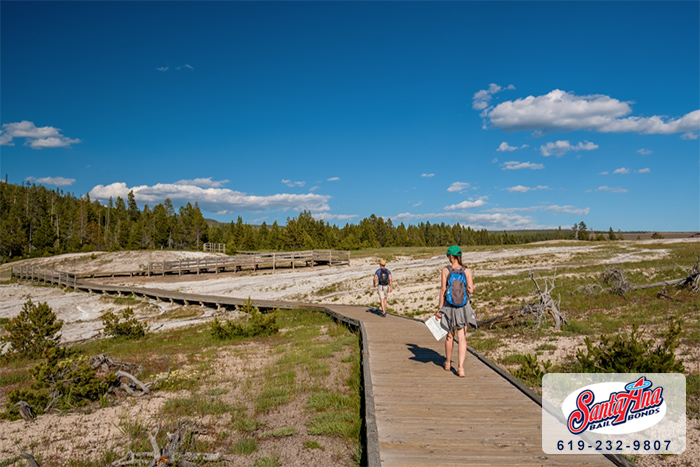 hen people go to a new place for the first time, especially while on vacation, they want to see everything that they can. For some people it is enough to simply follow different sightseeing signs and trails. However, some people would rather get an up close and personal look at some of the sights, even if that means ignoring posted signs and warnings against doing so.

When it comes to Yellowstone National Park, the limit signs are definitely there for people’s safety. Despite the fact that it is a national park, Yellowstone is a highly active volcanic area, which makes it dangerous for people. The set paths, trails, and areas within the park are designed to help keep park visitors safe from the more dangerous areas.

If someone were to disregard the fences and signs that warn people from entering an area, they could face very serious consequences. Those consequences could either come in the form of injuries sustained from volcanic activity, injuries from local wildlife, or legal consequences.

This is exactly what happened to a couple of tourists who were visiting Yellowstone National Park back in September of 2019. Several witnesses observed the two men walking up and onto the cone of Old Faithful, the iconic geyser. Ever since then, the case against them has been pending.

Recently, the two men plead guilty to the act of trespassing and were sentenced to 10 days in jail, were banned from Yellowstone National Park for 5 years, and ordered to pay $540 in reparations to the park. This is a pretty light sentence for the men, as trespassing violations are typically misdemeanors that come with a $5,000 fine and up to 6 months in jail.

This also isn’t the first time people have decided to step off the designated trails in Yellowstone. There have been plenty of past incidents where people fell into hot springs and suffered severe burns or even died. As it is, these two most recent trespassers were lucky.

If the men had trespassed here in California, then they would have faced similar, yet different consequences. Here in California, under Penal Code (PC) 602, trespassing can be charged as an infraction, a misdemeanor, or even a felony in rare cases. How the crime is charged is dependent on the facts of the case.

With misdemeanor charges of trespassing, a person faces:

Felony trespass only occurs when a person makes a credible threat against someone or someplace and then within 30 days of making the threat, trespasses to get closer to the threatened individual. The consequences for felony trespassing come with:

There Are Reasons Not to Trespass

There are all sorts of reasons for why someone may have closed off certain sections of land to the general public. When it comes to lands in national parks, the reason is almost always safety. The people running the park don’t want tourists stepping on and destroying protected lands and environments. They definitely don’t want tourists to get hurt from walking into dangerous areas.

When it comes to Yellowstone National Park, the whole place can be very dangerous if people aren’t careful. It is filled with dangerous wildlife and it is on an active volcano that causes all of the geysers and hot springs after all.

What do you think of the people caught trespassing on Old Faithful? Do you think they get off easy for the act, or were park officials being too strict? What about California state law, does the punishment fit the crime? Let us know what you think in the comments down below.