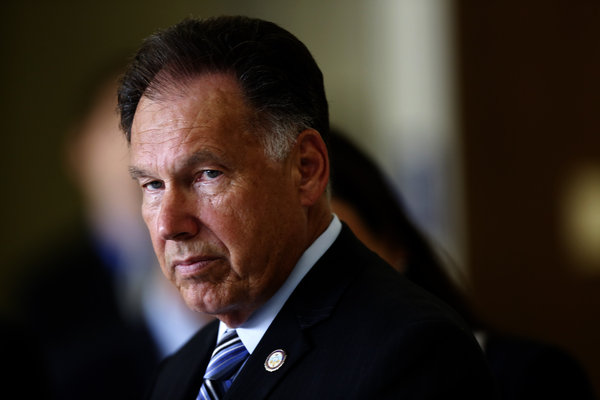 Orange County’s suburban juries are often dominated by unswerving, pro-cop biases, so District Attorney Tony Rackauckas had to be careful today when he asked a panel of eight women and four men to use “common sense” and hold two Fullerton police officers criminally liable for the 2011 beating death of Kelly Thomas.
“We have great law enforcement in Orange County,” Rackauckas said in his closing argument before the jury began deliberations around lunchtime. “This case was put together by good police officers. So this is not an indictment of the Fullerton Police Department or police departments [in the county].”

This case is only about the “unconscionable” treatment of Thomas by charged officers Manuel Ramos and Jay Cicinelli, the conservative Republican DA explained.

In July 2011, a group of cops savagely beat Thomas while pondering whether to arrest him for possession of stolen property after the 37-year-old, unarmed, homeless and schizophrenic man took several pieces of valueless, discarded mail from a trash can at the Fullerton Transportation Center.

An obnoxious Ramos initiated contact with the suspect, sassed him, antagonized him, and then, in a move the county’s top prosecutor calls criminal, declared his fists were going to “fuck you up.”

Rackauckas told jurors that “only a defense lawyer could make up” Barnett’s rationale that nobody would consider the officer’s statement as a looming threat of excessive force.

John Barnett and Michael Schwartz, defense lawyers for Ramos and Cicinelli, respectively, insist that Rackauckas and four doctors–all of whom independently testified the cause of Thomas’ death was the severe police beating that denied him critical oxygen–are engaged in an undefined conspiracy to frame their clients.
Rackauckas told jurors that if there was any conspiracy it was among Fullerton cops Stephen Rubio and Kevin Craig, who shamelessly testified for the defense that they couldn’t see any misguided police conduct during the relentless, seven-minute beating–never mind that the department fired Ramos and Cicinelli in the wake of the killing.

Adding to the craziness, both veteran lawyers adopted angry poses and asserted there is “no evidence” tying the beating to the death that followed.

For example, Barnett and Schwartz asserted the fully armed cops needed to pummel the 160-pound Thomas because they feared his supernatural strength and the officers should not be expected to pay attention to the victim’s repeated complaints about a dwindling supply of oxygen.

Schwartz portrayed Thomas–who never swung a single punch—as giving the group of cops “the fight of their lives,” but the officers emerged with only tiny, boo-boo scratches.
Apparently willing to simultaneously assert contradictory accounts, Cicinelli’s lawyer also described Thomas’ fight stance during the attack as “rigid and locked and trying not to move.”

And all the horrifically gruesome wounds to Thomas?

Schwartz boldly told the jury those injuries could have been caused not by the cops, but “from just rolling around in the street.”

Though his client bragged to fellow cops after the beating that he’d “smashed” Thomas’ face “to hell,” Schwartz provided a dismissive view of the wounds.

Said Rackauckas, “Some of the things the defense said were pretty ridiculous.”
Jurors are now in their first few hours of deliberations inside Superior Court Judge William R. Froeberg’s 10th-floor Santa Ana courtroom.