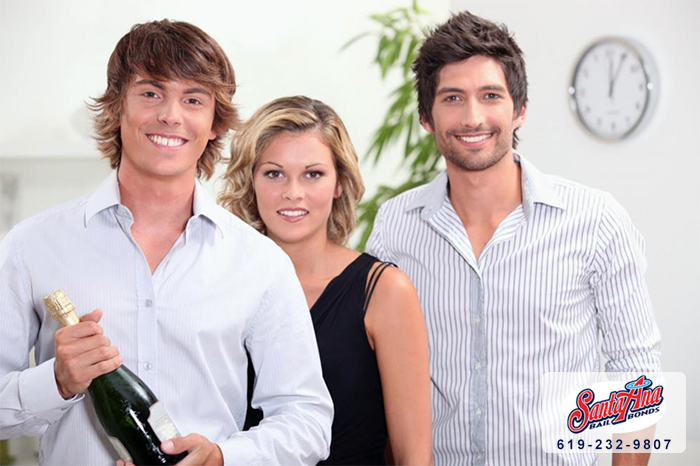 s this year draws to a close, pretty much everyone is planning out how they are going to celebrate. Parties will be happening all over the world and deciding which party to go to can be a daunting task. Luckily, the end results are pretty fun, provided a person doesn’t make any bad decisions.

As an adult, most parties that people go to have alcohol at them. This isn’t usually a problem, as long as everyone drinks responsibly. A person should know their limits with alcohol and they should have a safe ride home.

No one should ever drive themselves after consuming alcohol. Being drunk while driving is a great way to cause an accident. On top of that, it is a surefire way to get a ticket and even get arrested. So while enjoying the New Year’s Eve celebrations, people need to be responsible or they will face some harsh consequences.

Here in the state of California, just like everywhere else in the country, it is illegal for a person to drive drunk. Under Vehicle Code (VC) 23152a, driving under the influence of drugs and/or alcohol is illegal. A person is driving under the influence any time they consume enough alcohol that their abilities are impaired enough that they can no longer operate the vehicle with the care and caution of a sober person.

VC 23152b makes it illegal for a person to drive a vehicle if their blood alcohol concentration (BAC) is above 0.08%.

VC 23153 makes it a crime for a person to drive under the influence and hurt someone. Basically, if someone ever commits DUI and seriously injures someone in the process, they will be charged with this crime.

Something else to consider when planning holiday parties are DUI checkpoints. Whenever holidays roll around that tend to involve a lot of drinking, such as New Year’s Eve, law enforcement agencies tend to setup DUI checkpoints in heavily trafficked areas. These checkpoints are setup in the hopes to catch drunk drivers before they are able to cause an accident and hurt/kill someone.

DUI checkpoint locations will always be posted in advanced to give people the ability to avoid them if they choose to. If a person comes across a checkpoint, they will likely have to wait in line until an officer is available to talk to them. The officer will ask a few simple questions and if everything checks out, they will allow the driver to continue on their way.

There are a lot of specific incidents when it comes to DUI. The consequences of DUI depend on which particular incident occurred. For a first time offense, a person faces misdemeanor charges that come with:

The consequences for basic DUI increase with each offense.

If a person commits DUI and hurts someone, they will typically face misdemeanor charges that come with:

If a person commits too many DUI’s within a set time period, or they kill someone because of DUI, they will automatically face felony charges. Felony DUI charges come with:

These charges may seem light, but if a death was involved, they are often charged with vehicular manslaughter charges, which carry harsher consequences.

End the Year on a High Note

As the end of the year draws closer, everyone is planning out how to celebrate it. No matter what a person decides with the celebrations, if a person plans on drinking on New Year’s Eve, they need to do so responsibly. This means knowing their limits and having a plan to get home that doesn’t involve driving themselves.

In today’s modern world, getting a safe ride home is a piece of cake thanks to apps like Uber and Lyft. Plus, there are always the traditional methods such as hiring a taxi or just designating a friend as a sober driver.

No matter what you end up doing this New Year’s Eve, be sure to send 2019 off on a high note, which means not getting a ticket for DUI or causing an accident. From everyone here at San Diego Bail Bond Store, have a safe and happy new year!